Scope for the Hyperloop in the Indian Subcontinent
By Pranit Mehta

Hyperloop is essentially possibility of high-speed travel in pods inside a partial-vacuum tube. It is the brainchild of Tesla founder Elon Musk, who open-sourced the basic design in 2013 in the form of a whitepaper. This article would primarily be focussed upon the fact that India opens up great avenues for the implementation of this new concept, Hyperloop. Along the article, we would be traversing through several topics like proposed routes, the socio-economic impact it would have and so on. Firstly, lets look at this question. 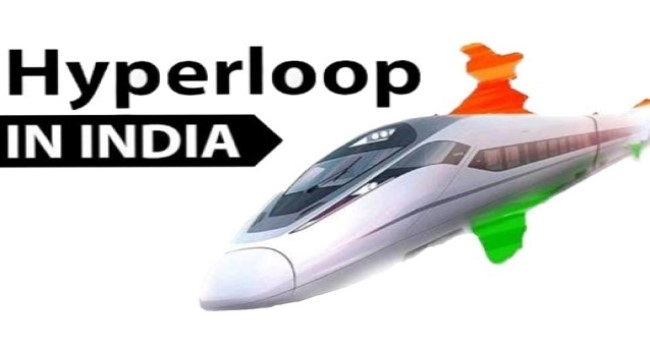 India is the seventh largest country by area and second most populous country in the world. This South-Asian country houses almost 1.3 billion people. India is currently one of the fastest growing economies in the world. Looking at various initiatives being taken by the Government of India to develop the lifestyle of the citizens of the country, Hyperloop could definitely be a worthy leap to be taken in the Transportation sector in the nation. India has various modes of transportation already existing and being extensively used in all parts of the nation. This country has the 3rd largest railway network and the most heavily used one in the world. In spite of this, there is a lot of scope for a new mode of transport to be introduced, keeping in mind the population and time being spent on travel by each individual. Most importantly, there has been quite some time now since there has been some huge breakthrough in the Indian Transportation System.

Currently, the fastest train which runs in India is at around 100mph (160 kmph). This clearly explains how much time the Hyperloop would be saving for the people of this country. Several Hyperloop companies have already been in talks with the Indian Government and some routes have been proposed too for immediate implementation of this in India. This would be discussed in detail later in this article. Optimum use of Hyperloop would mean that a capsule would come to a station in every 7 minutes. Each capsule has a capacity of 3,400 people. Imagine how many people a day can be transported every time.

Since this would reduce the travel time between two cities drastically at a reasonable price, this would open opportunities for people to reside in one city and work in another. This would ultimately help in decongestion of cities and urban areas. For instance, the Mumbai-Pune route can now be travelled in less than 20 minutes, which is like a dream come true for many residents around who either shift their residences or travel each day for work.

In short, Hyperloop, the 5th mode of transport, would be the solution to bridging the gap between the large population and the lack of existing infrastructure. It is rightly said that India has more scope for urban transport than the UK, given the current challenges it is facing in terms of transportation.

As of now, the following routes have been proposed for implementation of the concept of Hyperloop in the Indian Subcontinent. These routes are currently being checked for feasibility and few of them are found to be viable too. If the plans are well executed, India could see its first Hyperloop by 2023, at the maximum. Most of these are going to happen as partnerships between the Indian Government and private companies like Hyperloop Transportation Technologies, Hyperloop One, etc. It should be noted that the routes proposed have taken into consideration the willingness of people and how it could drastically change their lives for good.

These routes are very much going to modify the lifestyle of Indian citizens who have to commute regularly for business purposes, mostly. In a general survey conducted by Hyperloop One, the citizens of India seem pretty excited about this new mode of transport being implemented in India.

In fact, there have talks between the companies and several Indian representatives like the Prime Minister, Union Minister for Road and Transport, etc. This shows that the Indian Government is also keen enough to proceed with this venture, given that the ongoing checks turn out to be positive.

Since this is a huge project, and requires lots of human force and lands too, it is going to have a great impact on the human lives here. Most importantly, it would help the citizens here only if it was made affordable or reasonable to travel via the Hyperloop.

Building the infrastructure is going to be expensive. But once the Hyperloop network is in place it is going to be a different story. Hyperloop uses vacuum and magnetic levitation to get high speeds. So, the energy consumption is very low compared to other faster modes of transport like bullet trains or aircrafts. The maintenance cost of Hyperloop pod is low as there is no mechanical contact happening real-time. This means there will be less wear-and-tear due to friction. Also, the pods are weather-proof.

Essentially, all these savings from running cost will directly translate to savings for the passengers. Given the mass transport market in India, over 20,000 passengers are expected to travel by this during peak hours. Thus, the cost of tickets can be lower. Though we can’t directly approximate the cost, it is not wrong to say that will not be as costly as the fares for airways currently in the country.

One problem that the builders will be facing is the land acquisition, which has been a major problem for any project implemented in the past as well. Once this is done by the Indian Government, then there is nothing that could potentially hold this project from execution. Another major issue is the inconvenience caused to the residents around, if any, during the functioning. This can be resolved by having the whole system underground. Though this could prove a bit costlier to manufacture, it is considered worthy enough by many.

On the contrary, it would ease the lives of people who have to travel for either their work or other reasons manifold times. It would help spread apart the congestion in some of the existing modes of transport too. “Hyperloop technology produces 30 percent more energy than it consumes, which means that it produces a usable surplus that can be transferred to other users.”, says Bibop Gresta, co-founder and chairman of HTT.

To conclude, we have seen how much scope the Hyperloop has in the Indian subcontinent. Thus, it makes great sense in moving ahead with finding other feasible routes and manufacturing the system too. We, Team Avishkar Hyperloop, are doing our best to demonstrate technical feasibility and viability in this concept in the country. We aim to see ourselves as ambassadors for the Hyperloop initiative with the right cooperation and collaboration.