Avishkar Hyperloop at the Finals !
By Aditya Ranade

27 students. 1 Institute. 1 Nation. Millions of supporters. That's what it took for Avishkar Hyperloop to reach the finals of the SpaceX Hyperloop Pod Competition.

After a gruesomely tiring 2-month period which saw the entire team put in massive efforts in the sweltering Chennai heat, Avishkar Hyperloop reached the SpaceX headquarters in Los Angeles, California in the second week of July. Once the jet lag ran its course, it was back to work for all of us ! 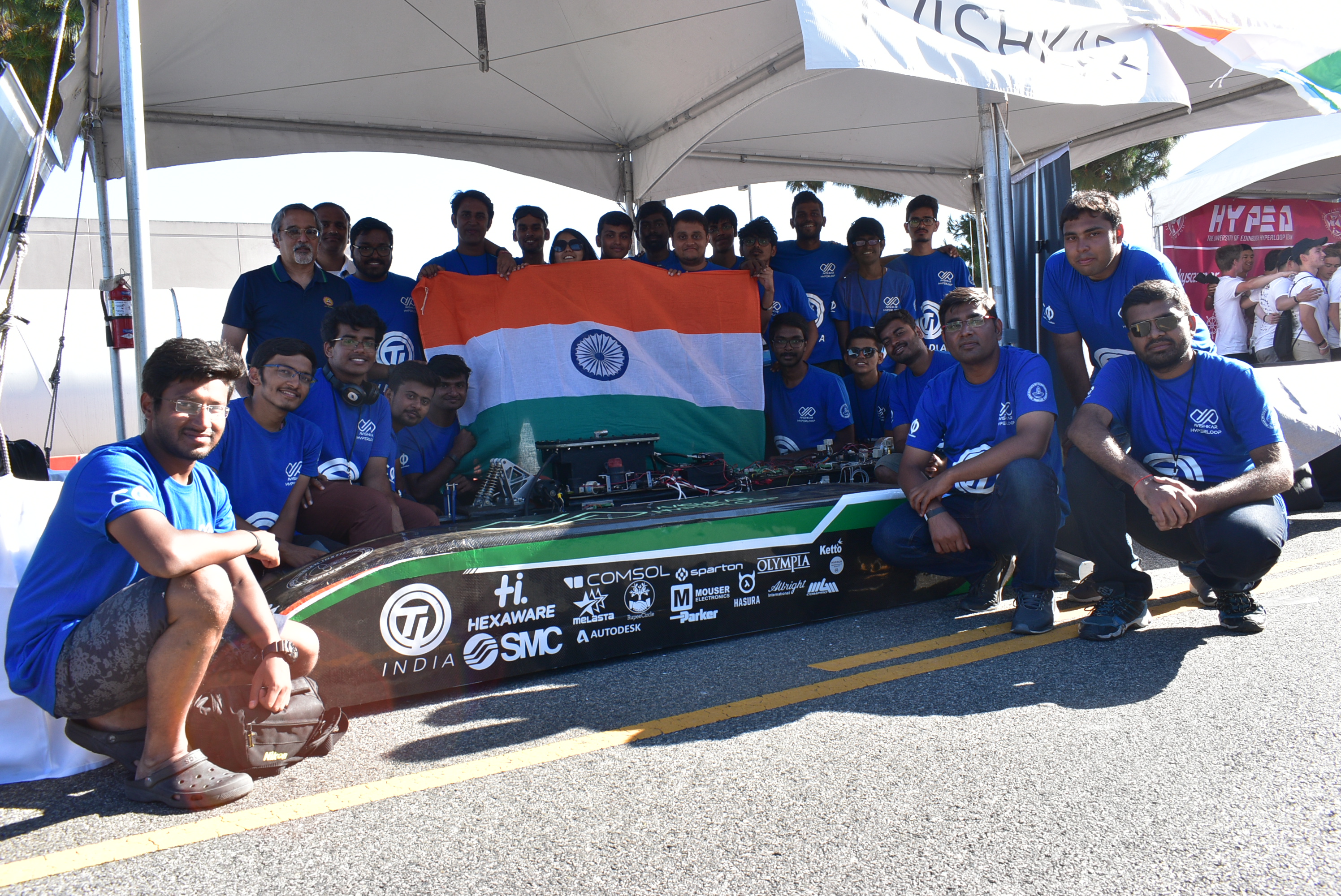 The testing week started on the 15th of July. As we were (quite literally !) from the other side of the world, in order to obtain the necessary custom clearances, our pod had to be disassembled before shipping. Nonetheless, the pod arrived in LA safely and on time. Assembling the pod took 2 days in itself, as we had the largest pod by far in the entire competition.

Being one of the few teams that were participating in the finals for the first time, we were quite inexperienced and it probably showed in the way we approached the testing week. As the other returning teams raced through their tests, we were stuck figuring out the optimal way to go through all the tests that needed to be completed.

Despite all this, at the end of Testing Day 1, we were Tied 7th in the standings based on the number of tests completed.

The next 3 days were the same. The other teams breezed through their tests, while we lagged behind due to lack of experience. After we spent a night at a workshop owned by one of our alumni, trying to perfect every single thing that may or may not play a part in the upcoming tests, our campaign was back on track. Needless to say, nights-out follow our team wherever we go !

Day 5 was the pivotal point. We received almost 40 test approvals from the inspectors, which propelled us from 16th place to 8th. That night, the entire team slept with a sense of accomplishment. But the next day was the last day of testing. By then we had accepted the fact that we will not be racing our pod through the tube. But we still had a big target in mind : Finishing in the top 10.

And we did it. The last day of testing went smoothly, and Avishkar Hyperloop, in its maiden appearance, finished as one of the Top 10 teams in the world. Not the best result, but a great result nonetheless.

And then the day of the competition arrived. With the teams allotted individual tents, we were allotted the first tent, and as such, were the first team to be seen by the spectators who arrived for the competition. The sight of the Indian Flag above our tent was enough to drag every person with Indian roots to our tent.

The competition went on smoothly, with TUM Hyperloop winning (again !). EPFL and SwissLoop were the only 2 teams to implement the LIM on their pods, and reached respectable speeds of about 250 KMPH. Avishkar Hyperloop, being the only Asian Team, was also at the centre of focus of many spectators, and we received quite a lot of helpful contacts and suggestions from other teams as well.

The highlight of the day was when the team got to click a picture with Elon Musk himself, who also talked about his plans to make a mark in the Electric Vehicle market in India.

That ended the day, and the pod was again dismantled, repackaged and sent on its way back to India. The next day, some of our Alumni in LA arranged a small get-together for the team, where we got to interact with them as well as receive extremely helpful suggestions for the 2020 Competition.

And on the morning of the 26th, we were off ! En route India, to restart this wonderful journey ! New faces, new members, a new challenge !

But the same team.