The case of Hyperloop and Carbon
By Yash and Saksham

Hyperloop is the promised sustainable revolution to transportation. It will alleviate the humongous 7 Gigatonnes of annual CO2e "Carbon dioxide equivalent” or “CO2e” describes greenhouse effect of different gases in a common unit. For example, if 1kg of methane is emitted, this can be expressed as 25kg of CO2e as methane has much stronger greenhouse effect than CO2. emission by the transportation sector. Team Avishkar Hyperloop is performing cutting-edge research to develop scalable and efficient technolgies for a full-scale Hyperloop. After developing working pod prototypes and participating in international competitions, we are now working on scalable pod and tube technologies for a Hyperloop corridor in India. The destination is far and ambitious, so we have buckled up for the challenges ahead.

In this case study, we are trying to validate the carbon-neutral credentials and quantify the impact on carbon emissions of a full-scale Hyperloop between Chennai and Bangalore. Guided by the latest technologies under research, we have made reasonable assumptions to get a rough estimate. Read ahead to know more. 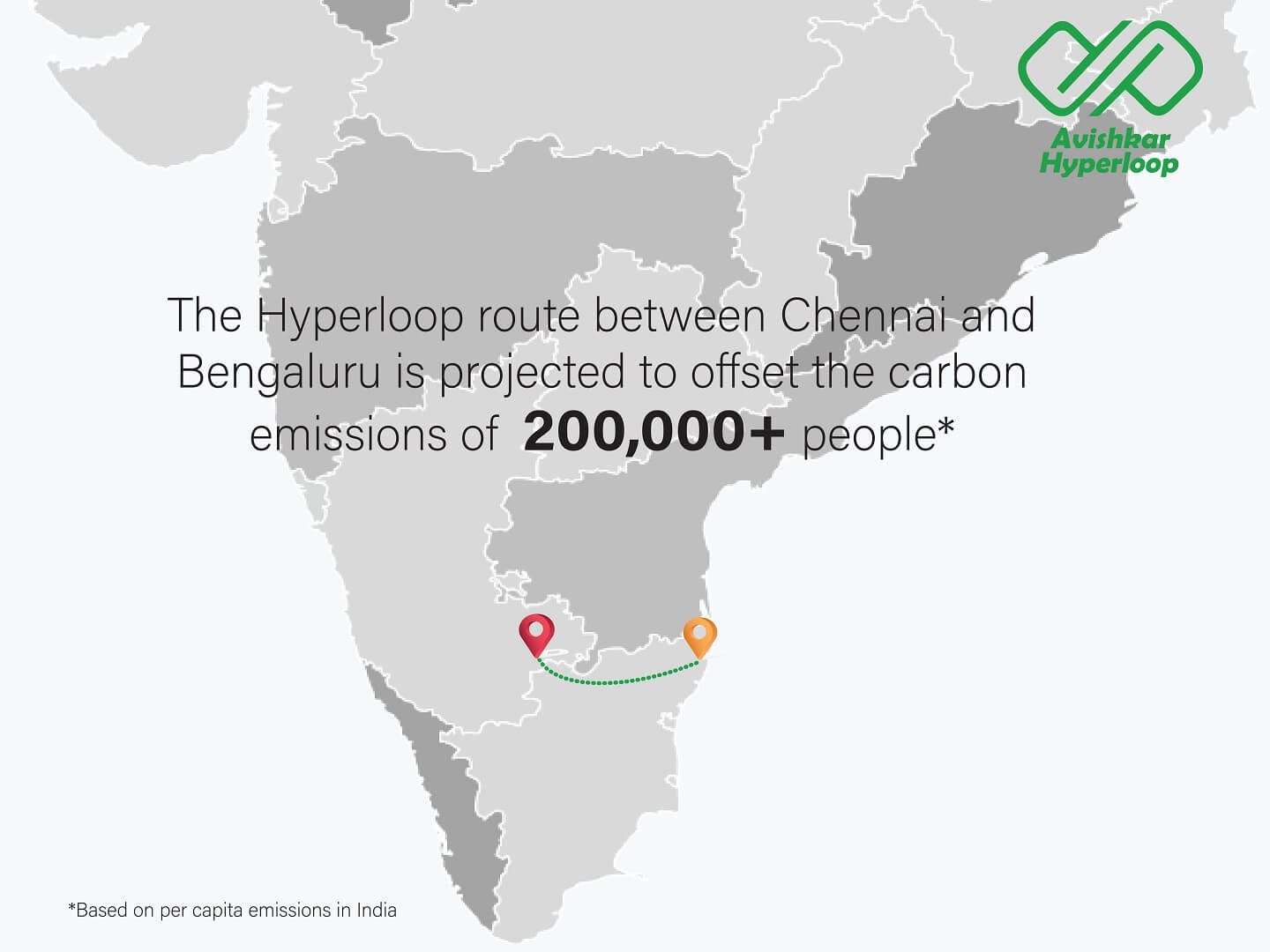 The Hyperloop
For the study, we have considered a full-scale Hyperloop system between Bangalore, the Silicon Valley of India, and the port city of Chennai. As a preliminary study, we have tried to quantify the emissions for the city pair and the impact of Hyperloop on this 340 km route.

The proposed Hyperloop pod weighing 20 tonnes 1 tonne = 1,000 kg will have a passenger capacity of 75 and complete a one-way journey in about 30 minutes. However, with the pod accelerating up to 1080kmph (0.7 mach) and acceleration limited to 0.5*g for passenger comfort, we need a braking distance of 10km. Thus inter-pod distance of 25km must be maintained for safe operation, or the time gap between two pods at the stations must be more than 2.5 minutes. Considering 18hour daily passenger operation, that gives us a peak capacity of 64,400 daily passengers.


Traffic
There was daily traffic of 45,000 people between the city pair in 2019's pre-pandemic world, causing 1200 tonnes of CO2e to be emitted into the air daily. The traffic was spread between highly polluting air (40 kg CO2e/passenger) and car (46 kg CO2e/passenger), and less polluting railway (12.6 kg CO2e/passenger). In fact, road transport accounts for a quarter of the annual global emission of 36,000 Megatonnes CO2e, and needs cleaner replacements for a sustainable future.

Hyperloop, apart from being very fast, very convenient and very awesome, is also a low power, earth-friendly mode of transportation running on renewable resources like solar energy, while all conventional modes run on fossil fuels.
Hyperloop pods need energy mainly to accelerate to the speeds of 1000+ kmph, but subsequent demands to maintain the speed are minimal because of the low-pressure tube environment. Though maintaining that low pressure itself requires energy as air constantly leaks in and is pumped out of the tube. Therefore, tube research is a primary focus of Avishkar Hyperloop as it is crucial for minimising leakage and initial cost while meeting structural requirements. However, with a low-leakage tube, the energy consumption per person of Hyperloop can be said to be mostly independent of distance.

To make the Hyperloop self-sufficient and a clean mode of transport, we must tap into renewable energy like Solar and Wind energy. Solar panels can be installed above the Hyperloop's vacuum tube, giving a 240MW rated power from the (340km long x 6m wide) 2 sq. km footprint. But the biggest challenge with solar is its uneven distribution, and considering the amount of energy, cost and environmental factors, energy storage is not an alternative. So the best solution is to supply excess electricity to the coal-heavy Indian grid during the day and take it at night.

As per our calculations, the annual energy production of this solar installation will be more than the yearly consumption of running the Hyperloop. Moreover, Team Avishkar Hyperloop has seen promising recent developments in its regenerative braking research, which can significantly reduce consumption.
So it's safe to conclude that Hyperloop is a carbon-neutral mode of transport, if not a carbon sink.

Due to the massive initial cost, the Hyperloop ticket price will potentially come out comparable to planes for a break-even period of 10-15 years. Thus, for the price-sensitive Indian market, it might largely replace aeroplanes and take relatively smaller shares from cars and trains.
We have created a calculator above which tells the total cut in CO2e emissions in a year when given an input of the number of passengers shifting to Hyperloop from that particular mode of transport. We have used some default numbers as reasonable assumptions, but you are free to change them and try out different combinations. Note that these default values are based on 2019 figures, and by the time Hyperloop is implemented in 2030, traffic between these two cities will have grown many folds.

The calculator also calculates the number of people whose total carbon footprint will be offset by this Hyperloop corridor. This calculation is based on the per capita carbon emission of 1.9 tonnes/year in India. Per capita CO2e emission of a country is a measure of all human activities (production and consumption) in the country.